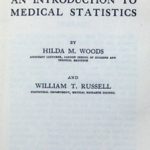 In introductory remarks in the first edition of An Introduction to Medical Statistics, Hilda Mary Woods and William Thomas Russell indicated their book is intended ‘only as a simple introduction to statistical analysis suitable to the needs of those taking the course for Diploma in Public Health’ at the London School of Hygiene and Public Health. However, while this book is comparatively unknown, it deserves recognition as reflecting an important stage in the transition from vital statistics to medical statistics as it is now understood. Indeed, it is arguably the first book to make this transition, certainly in the UK.

Between January and April 1937, The Lancet published a series of 17 articles on medical statistics by Austin Bradford Hill. The seventeen articles formed the chapters of Hill’s book Principles of Medical Statistics which was also published in 1937.

Over the next 55 years, the book was to run through 12 editions, and became renowned worldwide. The last edition of the 12 published to retain the original name was the 9th, published in 1971. In his preface, Hill reiterates from his preface to the 6th edition that contemporary examples are not necessary for illustrative examples ‘but possibly it may appear to some readers to be important, and an air of modernity can at least do no harm.’ However, he remained keen not to change what had been successful and therefore ‘decided to leave alone much that seemed well.’

Hill’s Principles of Medical Statistics has a special place in the history of medical statistics.