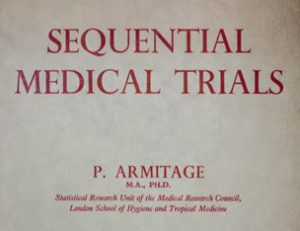 Based on his World War II work in a Ministry of Supply unit led by G. A. Barnard, Peter Armitage developed an interest in sequential analysis. A general paper on this topic, published in 1950, led him to think about introducing sequential analysis in clinical research, which he did with the encouragement of the MRC Unit Director, Austin Bradford Hill. Armitage’s initial work was given a warm welcome by the Quarterly Journal of Medicine.

After collaborating on a number of studies using his methodology, he “thought there was room for a short book”. Armitage’s 1960 publication Sequential Medical Trials was, in his words from an interview in 2013, “received politely, and the whole favourably, I think,” by both statistician reviewers and medical reviewers. A second edition was published in 1975. This work was the basis of many subsequent developments and sequential trials are now widely used.

In 1957, the Medical Research Council set up a Steering Committee to evaluate different treatments in cancer, and especially newer forms of radiotherapy.

Although leukaemia had not been affected as much by the newer treatments as other cancers, the committee considered nonetheless that current treatments for leukaemia were in need of critical appraisal. The Working Party, which included Dr (later Sir) Richard Doll, set up a factorial trial to elucidate the efficacy of mercaptopurine and different doses of corticosteroids.

Unfortunately, the trial showed that adult leukaemia was a rapidly fatal disease not greatly influenced by the methods of treatment. The high dose steroids were abandoned and the trial continued in a modified form.

An appendix to the paper was written by Radhakrishna, a statistician from the Tuberculosis Chemotherapy Centre in Madras, who was supported by a WHO Fellowship in Medical Statistics. He completed a PhD supervised by Ian Sutherland and was a regular visitor to the Unit during the 1960s and 1970s.

From this hesitant start emerged the MRC’s series of incrementally successful Leukaemia Trials which transformed prognosis for patients with leukaemia – children and adults alike.

On 14 January 1965 at the first meeting of the newly-founded Section of Occupational Medicine of the Royal Society of Medicine its President Austin Bradford Hill presented his renowned paper on association or causation. In it, he set out eight basic requirements for an epidemiological association to be interpreted as causative – strength, consistency, specificity, temporality, biological gradient, plausibility, coherence and experiment. Though based on the earlier ideas of the US Surgeon General, John Stuart Mill, and David Hume, the requirements have become known as “Hill’s criteria for causality.”

During Doll’s directorship of the MRC Biostatistics Unit, major epidemiological work was initiated on the international incidence, epidemiology and prevention of cancer and on statistical methods for the analysis of disease clustering and of cancer aetiology.

During Day’s directorship, the Unit’s emphasis on cancer epidemiology broadened to include cancer screening, how comparably exposures were measured, and the setting-up of an international study known as the European Prospective Investigation of Cancer.

The birth-control pill (or “the Pill”) is a method of birth control that involves taking by mouth, every day, a tablet containing a combination of an estrogen and a progestogen.

“The Pill” was first approved for contraceptive use in USA in 1960 and, since then, has become a very popular form of birth control currently used by more than 100 million women worldwide. However, by 1966, there were concerns about the risk of thromboembolism associated with taking oral contraceptives (OCs) and the Medical Research Council set up a Subcommittee chaired by Lord Platt to investigate: its report was co-authored (among others) by Dr (later Sir) Richard Doll, Sir Austin Bradford Hill and Dr Martin Vessey (later Professor of Social and Community Medicine, University of Oxford), all members of the Unit. The report summarised the results from three retrospective studies all of which indicated a potential link between oral contraceptives and thromboembolism.

Various combinations of estrogens and progestogens and their doses were investigated during the following years – including and especially by Martin Vessey who, with a team from Ljubliana in Yugoslavia, reported an early study of four oral contraceptives containing only progestogens, none of which had a satisfactory contraceptive performance.