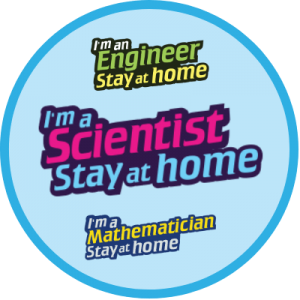 Over the past month, I’ve been involved in the brilliant and very rewarding student engagement project called, I’m a Scientist. Originally titled I’m a Scientist, Get Me Out of Here!, it was renamed to I’m a Scientist, Stay At Home!, and adapted to fit with the coronavirus age, where virtual engagement has become so important. The project is described as ‘an online, student-led STEM enrichment activity’. I also signed up to its relation, I’m a Mathematician, and I’ll compare both experiences, though both activities are identical in how they work.

I’m a Scientist provides a direct link between scientists and high school students, in the form of live text chats: both classes and scientists sign up for a slot at a specified time. When the time comes, around half a dozen scientists find themselves in an old-school chat room with around 25 students. The students may ask any science-based question they desire, and direct their questions toward either all scientists in the chat, or the particular scientist they’d like to hear from. There was a definite adrenaline spike whenever I saw “@Martin” appear on the chat. The chats last 40 minutes but feel much shorter, as the questions are non-stop from the beginning. In other words, the pace is fast, and after the first chat ended, I found myself looking back over my answers and thinking about how they could have been improved. I ended up saving answers to the most common questions about my work and rewriting them for use in later chats, which allowed me to respond succinctly and without falling behind the pace. A surprising number of questions I had were practical, clearly from students who are considering their future carefully. For example, some students asked how much time is spent working alone versus working in groups, what opportunities exist for travel, and so on. Students can also submit general questions outside of the chat to all scientists, which can be answered in our own time. However, these mostly fell outside of my range of expertise. For example, I can readily admit that I had no answer to the question “How do smells occur?”.

Students can vote for their favourite scientist or mathematician, with a winner being announced each week. For I’m a Scientist, the weekly winner receives £500 to spend on student engagement activities.

I’m a Mathematician ran at the same time as I’m a Scientist. I preferred I’m a Mathematician to I’m a Scientist overall, mostly because the Mathematician questions were more relevant to me and my area of work, which meant I could contribute more. I also think biostatistics came across as more appealing in the context of mathematics: “I help design clinical trials” sounds interesting, compared to more abstract fields such as number theory, but perhaps a little pedestrian compared to “I’m an engineer designing a cockpit for the world’s fastest car”. However, I’m a Scientist chats were divided into different zones, such as the ‘Medical Research Zone’, meaning that there was at least some similarity between the scientists in a single chat. I also felt that it was worthwhile to increase awareness about biostatistics in the wider context of science, so I’m very glad to have taken part in both activities.

I would recommend this kind of engagement activity to every scientist. Firstly, signing up and taking part is simple. You are encouraged to fill in a profile, including detailed education and employment history going back to high school. This helped me to see myself in the students I was chatting with, and show them what we might have in common: I too sat plenty of unscientific high school exams and worked in a supermarket for years. Secondly, your level of contribution is both certain and flexible: each chat session lasts 40 minutes, and you may sign up for as many or as few as you wish in a given week.

Most importantly, these chats provided direct communication with researchers, a window into a world that is a mystery to the vast majority of both children and adults. During one chat, it occurred to me that at their age, I had probably never even met a scientist, much less interviewed a group of them simultaneously. It was a privilege; not only to represent the university and the MRC Biostatistics Unit, but to be part of a conversation that could change the course of a young person’s life.