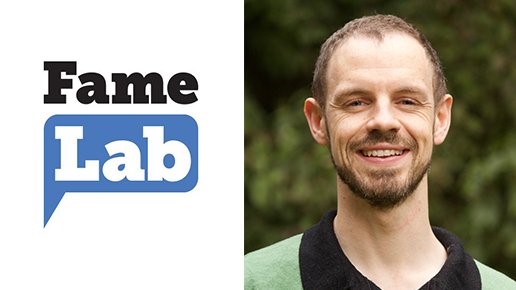 What was there to do on a Good Friday evening in lockdown? Tune in to watch the FameLab Cambridge finals of course! FameLab is an international science communication competition, to find and support the world’s most talented new science communicators, and this year, like so many other events, FameLab went online. Due to COVID-19 restrictions, the entire event has been virtual, meaning that participants speak to a screen and not to a room of people, and all those involved have to hope their home internet connection doesn’t let them down.

In March, researchers from across Cambridge entered the local heats, explaining their research to a panel of judges in a 3-minute recording. Among those researchers was Martin Law from the BSU. Martin is a Research Associate and recently passed his PhD viva. Martin took on the challenge of communicating his research in 3 minutes. In his heat, Martin talked about the concept of stochastic curtailment, where clinical trial decisions are made without complete certainty about the final result, and what this idea has in common with golf.

Martin won over the judges and he made it through to the Cambridge finals. Similarly to the heat, he explained the idea of curtailment in general, where clinical trials are allowed to stop early in the face of very strong evidence. This time, the analogy used film: if we are watching a film but not enjoying it at all, we might choose to cut our losses and switch off before the end. In the same way, if the current results of a clinical trial show very little evidence that a new treatment works, we might choose to stop the trial early and abandon the treatment. Conversely, and admittedly different from films, if the current results show strong evidence that a new treatment works – in other words, if things are going well – we might choose to stop the trial early to use the same treatment in a bigger trial. In both cases, we end up reaching a decision more quickly than waiting until the scheduled end of the trial. Martin went on to explain that he has written software that figures out how good or bad the results of a clinical trial should be allowed to get before the decision to stop is made.

Martin’s talk was fantastic. It was informative, entertaining and extremely interesting. He said:

“I’m used to giving talks, but I still felt a surprising amount of pressure speaking live without any slides. Maybe in academia we rely on slides too much! I learned a lot by having to give a different kind of talk, and it’s something I’ll think about when I’m giving more “normal” talks in future.”

There were also 9 other early career researchers from across Cambridge who took part in the finals and all gave great talks covering planets, osteoarthritis, uranium dioxide and much more. Overall, it was a thoroughly enjoyable evening of science communication, and all virtual.

Congratulations to Martin and all the Cambridge finalists.