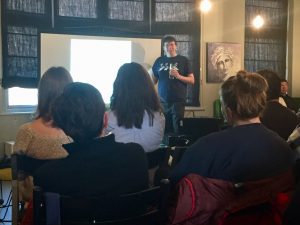 On Monday 14th May, Dr Simon R. White, Senior Investigator Statistician and Public Engagement Champion at the BSU, participated in one of the several Pint of Science events taking place in Cambridge from the 14th – 16th May. Pint of Science is an annual national science festival that aims to communicate contemporary scientific developments to the public in an interesting, engaging and approachable way by bringing scientists to the pub and other accessible places.

Simon was one of four Cambridge researchers speaking on the theme of ‘Immunology: Cells, Genes, and Supercomputers’ which took place at Novi, Cambridge. Simon’s talk was entitled ‘One, Two, Skip a Few‘. Supported by simple and engaging slides, he discussed the importance of why statisticians need to count people, using three recognisable examples  – cancer survival, unemployment and dementia diagnosis. Simon explained why counting people is fundamental to understanding the impact of research and policy on the health and wellbeing of the population. Simon said: “Unless we can count how many people are affected, we cannot have a proper debate about the society benefits, or ills, of things that affect our lives.”

A key highlight was Simon discussing his area of research which focuses on using statistics to estimate the incidence of dementia in the population. Building directly on his research of Bayesian approaches to accounting for missing data, he presented current research into the interesting question of how many new cases of dementia are expected each year. 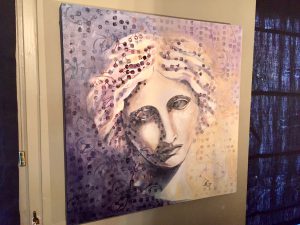 In addition to his fantastic talk, Simon also collaborated with a local artist as part of the ‘Creative Reactions’ element of the event, where artists participate and engage in a creative exercise with the Pint of Science speakers. Simon was paired with Nelly Harvey, who was given an outline of Simon’s talk and then created a piece of artwork using a medium of her choice. The artwork was presented by Nelly just after Simon’s talk and was then exhibited at the ‘Creative Reactions’ event on the 18th and 19th May at St Paul’s Church in Cambridge. Nelly chose to create a painting which included the face of a statue and a pattern of a long interlinked network diagram over the top (see image to the left), reflecting the importance of the human element of statistics.

Overall it was a thoroughly enjoyable evening at Novi, thanks to the speakers, Pint of Science organisers and Cambridge Immunology. Simon White informed and entertained audiences. His talk provoked many questions and comments, including one audience member saying that they “learnt a lot about statistics”. Simon summed up his Pint of Science experience:

“It is always a joy to take people on a statistical journey, to explore something that they might not consider otherwise.”