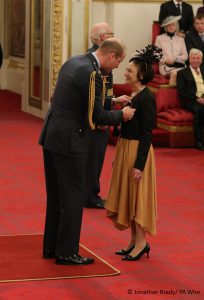 On Tuesday 19th November 2019, Professor Sylvia Richardson attended an investiture at Buckingham Palace where she was officially presented with her Commander of the Most Excellent Order British Empire (CBE) medal in a ceremony conducted by HRH the Duke of Cambridge.

Sylvia, who was named in the Queen’s Birthday Honours list earlier this year said she was “immensely proud’ to receive this honour.

She added:“I’m extremely delighted and humbled to receive this honour. It means a great deal to me personally and it was made extra special by being able to share today with my family. I firmly believe that this award is an important recognition of the pivotal role that statistics plays in cross disciplinary endeavors to improve health and I would like to thank all my close colleagues who made this journey with me as well as the Medical Research Council for supporting me” 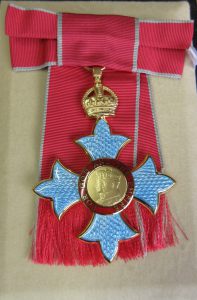 Sylvia, who received her award for services to medical statistics in France and in the UK, has held a Research Professorship at the University of Cambridge since 2012 where she is also a Bye-Fellow of Emmanuel College. Prior to this Sylvia held the Chair of Biostatistics in the Department of Epidemiology and Biostatistics at Imperial College London since 2000 and was formerly Directeur de Recherches at the French National Institute for Medical Research INSERM, where she held research positions for 20 years.

She is a Fellow of the Institute of Mathematical Statistics, the International Society for Bayesian Analysis and the Academy of Medical Sciences. She has worked extensively in many areas of biostatistics research and has made important contributions to the statistical modelling of complex biomedical data and disease mapping, in particular from a Bayesian perspective. Her recent research has focused on modelling and analysis of large data problems such as those arising in genomics.