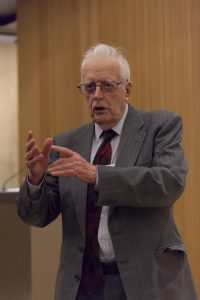 With the death of Professor Sir David Cox, at age 97, on January 18th, 2022, the MRC Biostatistics Unit lost a well-loved friend. We extend our deepest sympathies to his wife, Joyce, and his family.

David Cox’s contributions to science in its broadest sense, recognized by the Royal Society’s highest award, the Copley Medal in 2010, were immense and the field of statistics will continue to be influenced by his work for many years. Perhaps most significantly to our Unit, while his statistical work spanned many areas, his contributions to medical statistics have been fundamental to the development of many of the modern methods which are central to our aim and mission. We celebrate his long career and that he was able to remain active as a researcher until the end of his life.

However, while we celebrate his career, we grieve the loss of a very special man. He has supported the work of the MRC Biostatistics Unit in many, many ways over the years. In recent years, he has been a frequent guest in the Unit, particularly at our annual Armitage Lecture and, along with his characteristically incisive questions, has come the chance for many to be touched by his kindness and interest in others. And, with all his accomplishments, David Cox always remained a very humble man. While it did not happen in the Unit, I remember one occasion when he stopped in the middle of answering a question to ask if he was taking up too much of the questioner’s time! 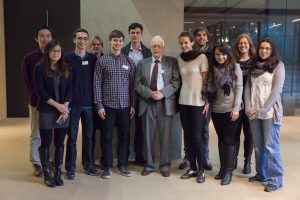 In addition, there are many individuals, a number having worked in the Unit, who owe an immense debt to David Cox for his mentoring, sometimes initially as a student as in my case, but for many others at critical, often early, stages of their career. What a privilege it was to work with him and to benefit from his scientific brilliance and personal support. He was a man whose reputation was enhanced, and never tarnished, by getting to know him.

In the sadness of his death, the MRC Biostatistics Unit, along with many, many others around the world, is so thankful for the life of David Roxbee Cox, a giant in the field of statistics who will have an equally large place in the hearts of many.